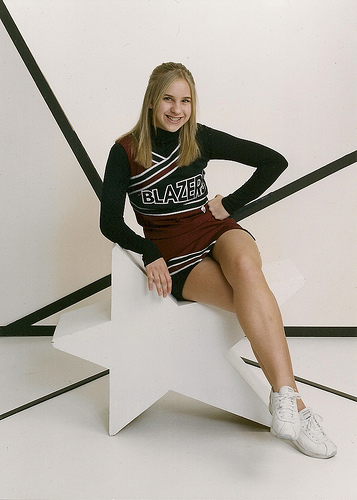 Kelli Christine Uhl was born January 1, 1994, at Scott AFB, Illinois. She was the first baby of the New Year in the Metro-East area. Jessica picked her middle name, because she was originally due around Christmas. She was late ever since.

If my pregnancy with Kelli was any indication, she was going to be a more difficult child than Jessica. And she was. But I wouldn’t have traded that kid for anything.

She didn’t sleep through the night until she was about 2.

It took forever to get rid of her binky. We started potty-training her right before her dad and I separated, so it took her longer to get out of the pull-ups. She was a picky eater and many dinners were spent with her crying and me yelling. Ah, good times.

She had a great sense of humor, and found something to laugh about it in every situation. She was a happy kid, and very affectionate. She loved animals. She was very artistic and creative.

She was definitely a middle child, after Maddy was born. Once her dad remarried and had a son, she was the middle child there, too. Very diplomatic and a peacemaker, and stayed out of the drama. Sometimes she stayed out too much, and you had to push her to open up about her feelings, because she didn’t want to make any waves.

She was friendly to everyone. Once we were leaving a basketball game at her school, and as we were walking through the hallways, most every kid we saw said “hey Kelli!” and she said “hey” right back.

She fought with Maddy most mornings. She snuck into Jessica’s closet to “borrow clothes”, because that’s what sisters do.

She had a contagious laugh, a goofy sense of humor, a positive outlook on life, and a huge heart.